Staggering Level of U.S. Debt Is the Elephant In the Room

Lorimer Wilson February 16, 2016 Comments Off on Staggering Level of U.S. Debt Is the Elephant In the Room 2,290 Views

Debt – personal, corporate, and national – is crushing the American

economy. It’s a huge elephant in the room and, at some point, it is going to go on a rampage.

[The original article by Peter Schiff (schiffgold.com) is presented here by the editorial team of munKNEE.com (Your Key to Making Money!) in a slightly edited ([ ]) and/or abridged (…) format to provide a fast and easy read.]

Over the last month or so, the mainstream seems to have realized that the economy isn’t on nearly as solid ground as government officials and central planners were telling them throughout 2015…One underlying fundamental that seems to get swept under the carpet is the staggering level of debt – both public and private. 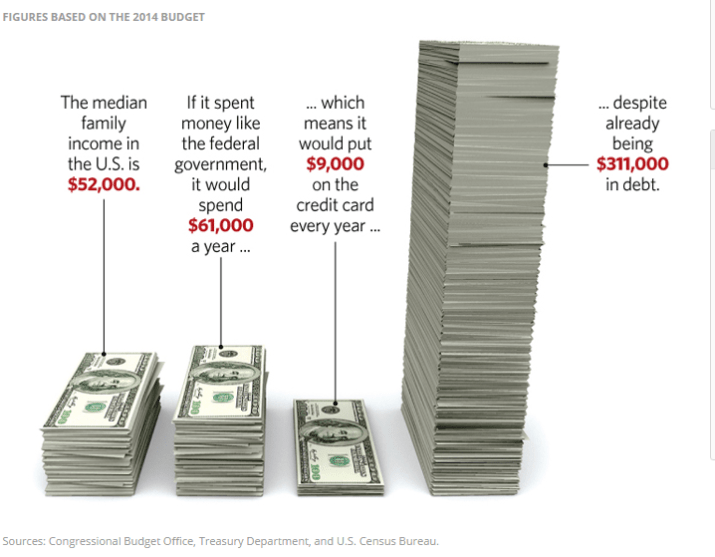 Last week, the U.S. national debt crossed the $19 trillion threshold. Most of us can’t even  grasp that number. The graphic above created by the Heritage Foundation puts it into vivid perspective, illustrating what this level of indebtedness and spending would mean to the average American household.

It’s easy to see just how much trouble a family is in when it’s $311,000 in debt and still putting $9,000 more a year on credit cards. Yet, when it comes to the federal government, everybody acts like it’s no big deal [but] it really is.

Just consider the U.S. budget ramifications pointed out by Yonathan Amselem in a column on the Mises Institute website:

“Low interest rates stemming from a growing money supply are the only reason the U.S. government has managed to service its gargantuan debt in recent years. The Congressional Budget Office itself has pointed out that even a slight rise in interest rates could potentially result in anywhere from $700 to $900 billion in annual tax payments just to service the interest on our debt. At this pace, paying the republic’s creditors will become our largest government program in no time. Future Americans might go to work and have 50% of their paychecks seized not to pay for government services, but simply to service debt forced on them by central planners.”

This is just one of many reasons the Federal Reserve cannot embark on a sustained program of interest rate hikes.

…The Federal Reserve and government central planners have built a house of cards on a foundation of debt and at some point, it will all come crashing down.

The national debt just surpassed $19 trillion officially. It’s going to be $20 trillion by the time Barack Obama leaves office, maybe more. He’s doubled the national debt. The next president is going to have to double it again in order to keep this house of cards from collapsing.

I think it’s impossible to finance that type of growth in debt but that’s what this bubble economy needs because all of our GDP grows based on debt. It’s not real economic growth, it’s just consumption that’s borrowed, and you need to borrow more and more money to get less and less GDP growth, and we’ve run to the point where we can’t do it anymore. The world is not going to continue to give us a pass, and so gold prices, I think, are going to take off.

Artificially low interest rates have enabled the government to borrow, spend, and increase the debt. Central bankers have distorted the economy with easy money, and as Amselem pointed out, it’s not just government that has run up a huge bill as a result:

“Public debt is far from the only distortion artificially low rates have wrought. Mortgages, auto loans, credit cards, and student loans have ballooned total consumer debt to $12 trillion, and this number is only trending upward. The easy credit economy manufactured by central bankers has obliterated American savings and replaced them with debt. The average American consumer has less than $1,000 in his bank account. He lives praying for no car trouble or a broken arm.”

And then there is corporate debt:

“Since 2008, corporate debt has doubled. Almost 100% of all corporate issued debt has been used to buy back stocks and prop up equity prices. This bears repeating. Almost none of America’s recently issued corporate debt has gone toward investing in plant and equipment, increasing the workforce, research and development, or expanding operations in any meaningful way.”

The extreme debt load in America today is one of those underlying fundamentals that simply can’t be ignored. Since years of Federal Reserve low interest rate policy helped build and sustain the U.S. debt economy we have today, it’s now impossible for the Fed to take away the drug. The junkie would go into withdraw and things would quickly spiral out of control. Just consider the aftermath of the small December rate hike. That is why I can so confidently say the Fed won’t keep raising rates. It is more likely to drop them back to zero, or even into negative territory, and then launch into another round of quantitative easing.

Debt – personal, corporate, and national – is a huge elephant in the room. At some point, it is going to go on a rampage.

Related Articles from the munKNEE Vault:

1. Life’s Great IF We Don’t Think About What Lies Ahead

Shouldn’t we give up and call an end to the entire fake, faulty and corrupt process called government? After all, life’s great if we don’t think about what lies ahead. Let me explain.

2. The American Way: Living “The” Lie

Appearances are all that seem to matter in our society today. Dying in debt will be common place in the coming years. Fully 21% of Americans say they don’t think they will be able to pay off their debts — including their car, credit cards, student loans and mortgages — in their lifetime. Our debt addict society is dying of an overdose.

3. Majority of Americans Are Willfully Ignorant Delusional Consumers – Here’s Why

A lack of discipline, inability to delay gratification, failure to understand basic mathematical concepts, materialistic envy, absence of critical thinking skills, and a delusional view of the world have left the majority of Americans broke and in debt. Let me explain further.

Share
Previous Might the Gov’t “Borrow” Your IRA to Fund Its MyRA? (+2K Views)
Next People Buy Gold For 1 Of 3 Reasons – Why Do You?